Project Location
This project takes in the greater Torbay Catchment which includes the Western part of the town of Albany the Torndirrup Peninsula, extends north to Redmond and west to Lowlands(see Map). It also covers the lower and eastern portion of the Wilson Inlet Catchment extending west to include the town of Denmark. The greater Torbay catchment contains the important coastal macro-corridor, which links West Cape Howe National Park to Torndirrup National Park which allows animal movement across the landscape.

Project background
In 2018, TCG ran 2 small projects, one aimed at learning more about the critically endangered WRP and the other focussing on feral animal control. Through the works we undertook, we now understand that: our catchment is extremely important for the possum in terms of climate, habitat and location; and that feral predators, mainly the fox is in very high numbers in our catchment and where no feral animal control is occurring possum numbers are low.

Project Overview
There are 3 stronghold populations for Western Ringtail Possums. They are Busselton, Manjimup and Albany. The Albany population is seen as increasingly important as the risk posed from climate change is far less. Until recently it was not understood that the greater Torbay catchment represents a signiﬁcant area of the Albany stronghold population. Torbay Catchment Group (TCG) and Wilson Inlet Catchment Committee (WICC) have partnered to continue survey work on public and private land to identify how far west and north the population extends.

Collaboration with our partners will ensure eﬃcient delivery of on-ground works.

The project builds on investments and community good will developed through previous projects. It supports our local communities and reinstates feral predator control in our much loved and iconic West Cape Howe National Park (WCHNP), part of the important coastal macro-corridor. The outcome will be greater knowledge, improved protection and resilience for the WRP population and a better informed community, united in protection eﬀorts.

Please keep your beloved animals out of the national park and if you are in the City of Albany Coastal Reserves, please keep them on a leash. 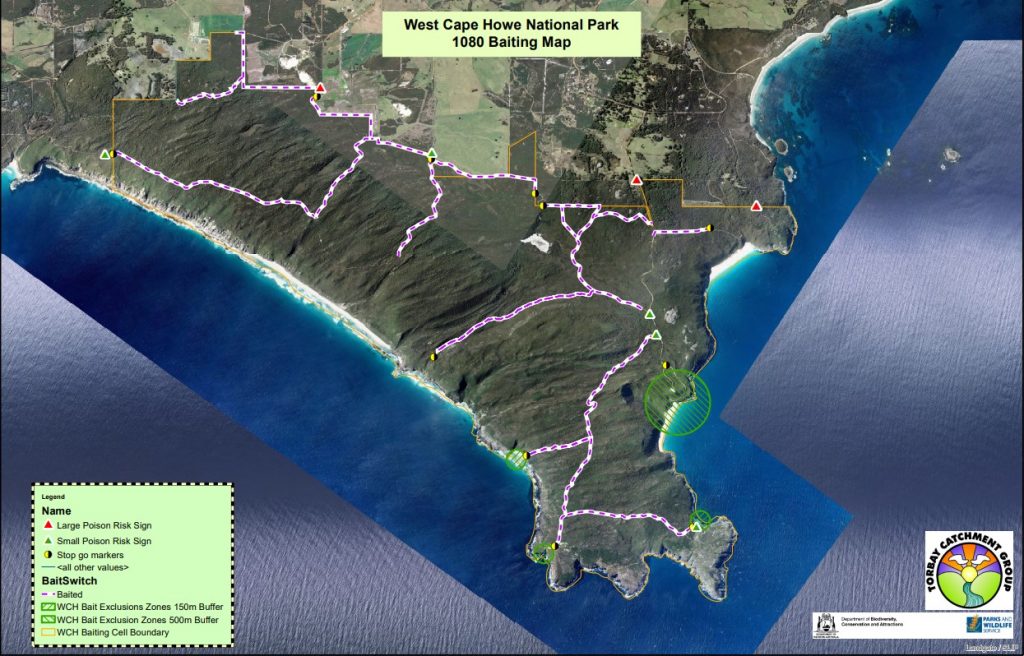 In Autumn and Spring camera monitoring, baiting and trapping has been completed for 2019 and 2020 and Autumn 2021 with some preliminary results.

In February 2020, survey and control was again conducted in WCHNP. City of Albany (CoA) land was also included, in the reserves of the Coastal Macro Corridor from WCHNP through to Torndirrup National Park. The area of CoA land consisted of 2164ha, bringing the total area of land to approximately 5300ha.

Autumn and Spring distance sampling for 2019 and 2020 and Autumn 2021 has completed. Western Ringtail Possum population estimates will be generated using distance sampling, a robust and widely-used statistical method that has been employed by TCG. Line-transects are walked at a steady pace and the perpendicular distance from the transect recorded for any Western Ringtail Possum sighted. Data modelling will follow to estimate populations in WCHNP.

Total area for fox shooting on private land as of November 2019 is 3200ha.

The Torbay Community Fox shoot had great results again in 2021 with a total of 198 foxes, 2 cats and 213 rabbits removed from the area.

Reporting for baiting and trapping in the first three years in West Cape Howe National Park and City of Albany are available: