This project builds on past investment and works by the group on possum conservation and feral animal control. The Greater Torbay Catchment is now established as an important part of the Albany Stronghold population of the critically endangered Western Ringtail Possum.

Torbay Catchment Group(TCG) and Wilson Inlet Catchment Committee(WICC) will partner to identify how far west and north the population extends.

This collaboration will ensure eﬃcient delivery of on-ground works. The project builds on current investments, community good will, supports our local communities and reinstates feral predator control in our much loved and iconic West Cape Howe National Park(WCHNP), part of the important coastal macro-corridor. The outcome will be greater knowledge, improved protection and resilience for the WRP population and a better informed community, united in protection eﬀorts.

About the Western Ringtail Possum 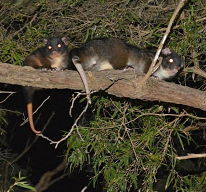 Confined to the south western corner of Western Australia, populations are currently 3 stronghold populations, that contain the highest density populations they are the Bunbury/Busselton regions, Perup areas and around Albany, the latter occurring from the Greater Torbay Catchment (possibly further west but we are unsure of the boundary) in the west to Mt Manypeaks in the east, with an outlying population in the Porongurup National Park to the north west.

The Western Ringtail Possum has a fairly small territory; usually about a hectare. They can breed at any time of year depending on conditions, usually with just the one pouch young. In this area many different tree species are used jarrah, marri, and sheoak are favourites. They mainly weave the leaves of a plant together and make a nest called a drey but will also use tree hollows. The possum’s diet includes leaves, fruit, flowers, bark and sap of myrtaceous plants. Locally the favoured food appears to be sheoak, but they also like the flowers and leaves of the Jarrah and Marri. Sometimes they are found in household backyards if there are thick shrubs and desirable trees (or some juicy rose petals which they love!).

An adult Ringtail Possum has a head and body length of 30 – 40 centimetres, a tail length of 30 – 40 centimetres and weighs between 0.8 and one kilograms. It has grey brown fur with lighter patches behind the ears and whitish underparts. It differs from the other large possums you see in our trees, the common brushtail possum, by being smaller in size, with smaller, rounder ears; but the most distinctive difference is the tail. The Ringtail Possum has a long prehensile tail with a pink hairless strip on the underside and a white tip on the end which the brushtail has fur over the full length of the tail but can also have a white tip.